Yes, this will be an article about an AICS-style magazine. Wait, wait, don't click away just yet. I understand that on the surface, there are about a hundred cooler things to talk about, but stick with me and maybe you will learn something or maybe find a solution for a problem you didn't even know you had "I.I.M.L."

Are you not getting the velocities you want? Have you been limiting yourself to short fat low B.C projectiles? Are you unable to seat your bullets long enough to touch the lands? You may be suffering from I.I.M.L. What is I.I.M.L or Insufficient Internal Magazine Length? It is a limiting factor for many cartridges and cartridge developers. It occurs when the distance between the front and the rear of the magazine is insufficient to accommodate a given projectile loaded at a certain length for a particular cartridge. 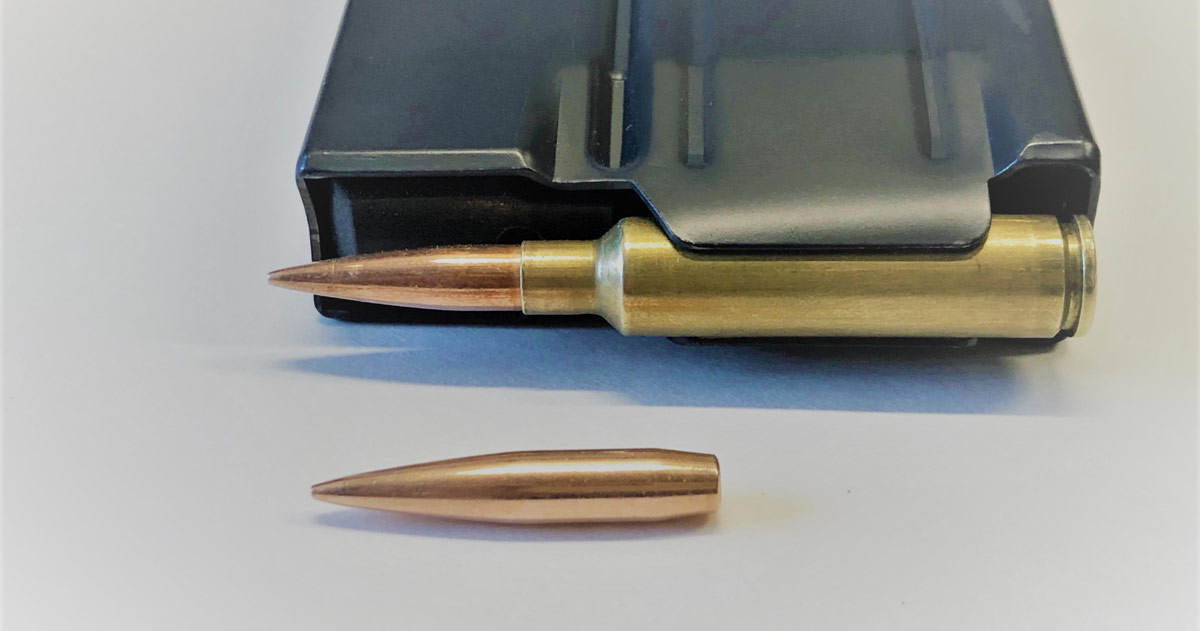 A cartridge with a 3.100 Cartridge Overall Length, in a standard AICS magazine.

For example, in an earlier article, I spoke about my affinity for the 6.5x55 cartridge, especially its improved version. My most recent endeavor has been a 25 caliber variation optimized for the 130+ grain projectiles which have recently come on the scene. The problem with this wildcat is my appropriate COAL (Cartridge Over All Length) is about 3.100". Unfortunately, short action magazines top out around 2.95 inches of internal length. Usually, I would be stuck jamming the bullet ridiculously deep into the case. Enter the XM or Midlength magazine. The XM magazine can accommodate rounds loaded out to roughly 3.2."

More: Capable and Versatile, A Close Look at the 6.5x55 Swedish

ORIGINS OF THE XM MAGAZINE

The XM Magazine project started in 2016 as a collaboration between Scott Satterlee and Matt Yore of Sawtooth Rifles. Scott was looking for a better platform for his newly conceived 6.5 Addiction (6.5 Sweedemoor) and another of his favorite rounds, the 7 SAUM. Yes, both of these can run in a long action with long action magazines, but that has challenges similar to the issues, the 6mm BR and Dasher shooter's face of the case leaving the control of the magazine feed lips before the tip of the projectile enters the chamber. The 7 SAUM and the 6.5 Addiction required some tweaking to feed correctly in a long action. On top of that, long actions have a more extended bolt travel and more weight, neither of which is good, so Scott convinced Defiance Machine to make the XM or midlength action and fabricated some magazines with Matt.

More: How to Diagnose Magazine Issues

XM MAGAZINES FOR THE AVERAGE SHOOTER

What if you don't shoot 6.5 Addiction or 7 Saum, nor have a Midlength action from Defiance, Lone Peak, or Zermatt? You can still leverage the benefits of an XM Magazine with a Long Action rifle as long as you have a bottom metal that will accept an XM Magazine. Hawkins Precision makes a Remington 700 bottom metal that will accept an XM Magazine. Tikka centerfire actions are all long actions, with the only difference being the bolt stop and the bolt face. MDT makes a very popular AICS bottom metal for the Tikka CTR, UPR, and Arctic Rifle for the XM Magazine. If you want a chassis option, MDT makes an ACC compatible with the Defiance XM action. MDT has further developed the XM Magazine with designs optimized for 300 WSM/6.5 PRC and 30.06/6.5x55/6.5 x 284.

What cartridges would a person want to shoot? Anything that has been hamstrung by the 2.95" internal dimension of the short action magazines. This could be the .260 Remington with heavier projectiles, 6.5 PRC, the .284 Win family, the 6.5x55, and offshoots but most appealing to me is the .300 WSM. The 300 Winchester Short Magnum or 300 WSM is an excellent all-around hunting cartridge. It can keep up with the venerable .300 Win mag when shooting lighter projectiles, and I suspect the reason it starts to fall behind when shooting the heavies is the loss of case capacity when seating the longer bullets not to exceed 2.95". But what if we had another ¼ inch of room to play with? A ¼ inch increase in case capacity is significant and allows for more powder which translates to higher velocities. Add to this that many bench rest shooters swear by the accuracy improvements of the non-belted shorter, fatter case, and I think it may be a winner, especially with the 212 grain to 215 grain class of bullets. Please note that a configuration like the one I just mentioned would require a custom chamber with a longer lead to accommodate the longer projectiles. A gunsmith could also throat out an existing chamber if the shooter already had an existing barrel and wanted to set up the longer C.O.A.L. 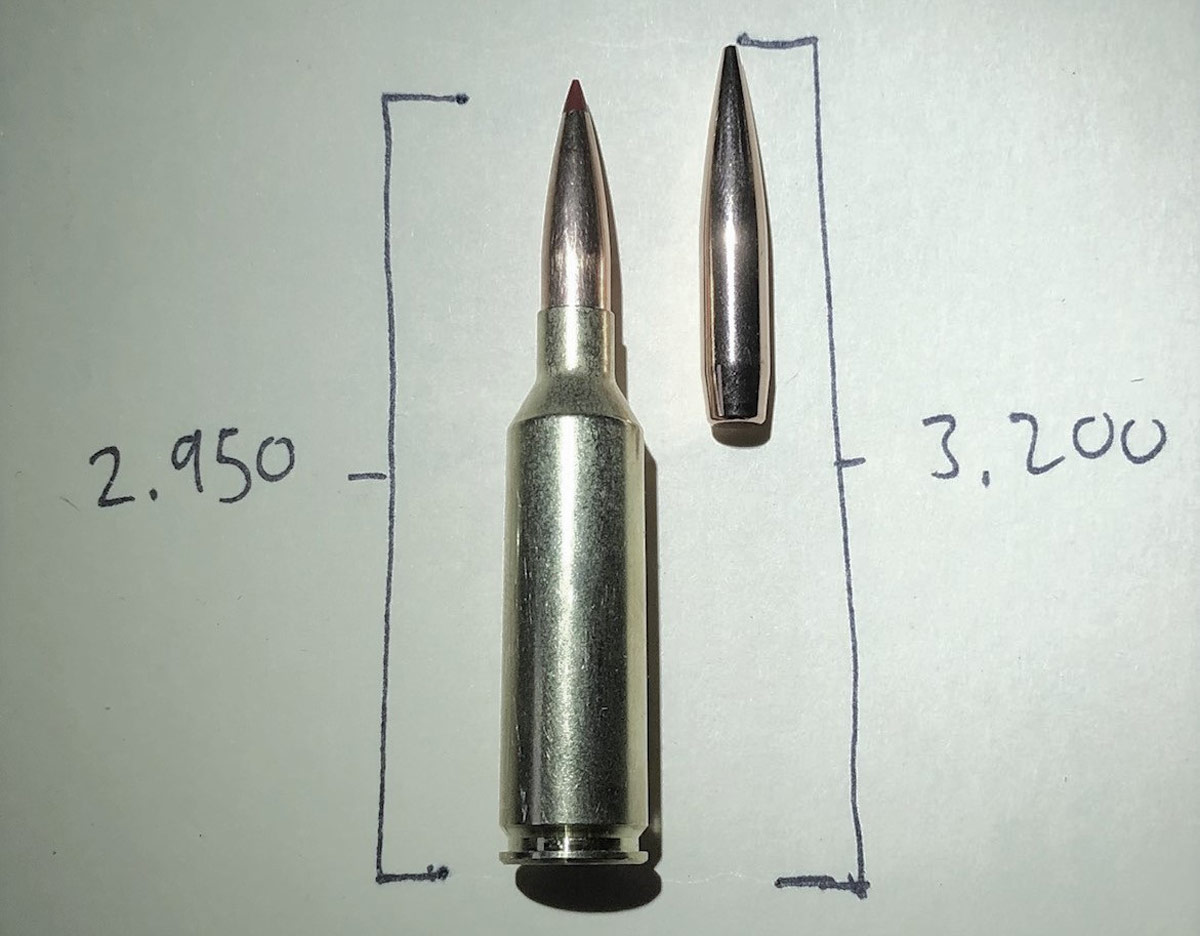 An XM Magazine will allow for more powder and extra performance

More: A Look at Reduced Loads

The adoption of mid-length actions and XM Magazines is still in its infancy here in the United States, but from my observations, it is gaining steam. Hunters are looking for a lighter alternative to long actions. Recreational and Competition long-range shooters are looking for ways to shoot the new generation of long skinny bullets without stuffing them so deep into the case that it eats up 10% of the powder capacity. Finally, there are just some cartridge and bullet combinations that will feed better out of the appropriate length magazine. I know a 300 WSM shooting the Hornady 212 Eld-x loaded out to 3.2 inches and fed from an MDT XM magazine is in the cards soon.