The growth of precision rifle shooting has opened the space to a diverse group of participants and diversity of thought. There are differing opinions about many factors within the discipline. What's essential and what's not? Some things are debatable about their importance and longevity. Still, velocity is one of those foundational principles that, while arguable on certain levels, is a critical core component that needs to be understood and embraced. For without velocity, there is no precision shooting.

My layman's definition of velocity is the speed at which the projectile that you shoot travels. Taken a step further, velocity is every speed throughout the bullet's flight. Velocity is always updating itself, typically in a decreasing manner. Although there is a build-up of velocity within the barrel, it diminishes once it leaves the muzzle.

WHY IS IT IMPORTANT

Higher velocities are necessary to shoot extended ranges, though. If you want to shoot past 1200 yards with consistency, and predictable success, you'll need more velocity than what the typical 175 gr. .308 is able to produce. Velocity is majorly important if you plan to hunt, as it will determine how much energy is exerted upon your target. It will also determine how your bullet is likely to perform within the target. Lower velocities with hunting rounds typically mean decreased terminal performance, but of course, there are degrees of this.

Velocity on 22LR is low, but it can still achieve excellent consistency and predictability with ballistics solvers allowing us to push the varmint bullet to 4, 5, and even 600 yards with consistency.

Just remember that velocity is what gets you to the target and is a value you must always be aware of in some manner and measure with some repetitiveness throughout your rifle's life span. With that, let's look at ways to measure velocity. 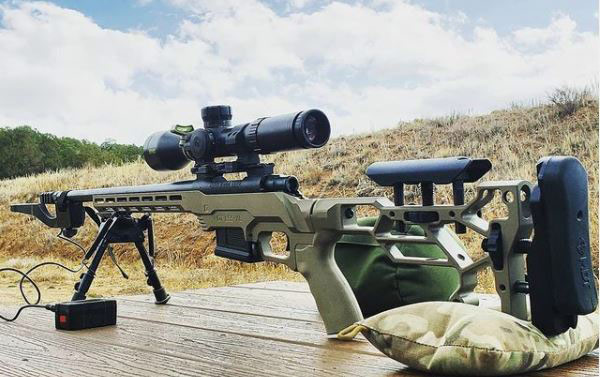 If you're a factory ammo shooter like me, then you may be thinking, "I can just use the velocity printed on the box of ammo that I buy." Yes, you could, but you'll likely end up with inaccurate results downrange and skewed ballistics solutions. The reason for this is that the velocities on the box were achieved with a particular barrel length in a particular environmental setting different from yours. The same ammo will bring different results when fired from your rifle. It will also vary from the results your friends get from their rifles. For the most part, your rifle's velocity is specific to it, although it too will change over the barrel's lifetime, speeding up over time.

The best way to measure velocity is with a chronograph. Chronographs are now available in several different types and budget ranges, and they've become more accurate and dependable over time resulting in more consistent data for the shooter/rifle combination.

The most popular types of chronographs are as follows.

The most recognizable chronograph uses two sensors built into a body. The bullet must be shot over the sensors, and when done, the light interrupted by the bullet passing over the sensors triggers the measurement. The time it takes for the bullet to travel between sensors is measured to achieve a velocity. Often, a couple of diffusers, basically plastic arcs, are positioned over the sensors to help them read better under certain lighting conditions. 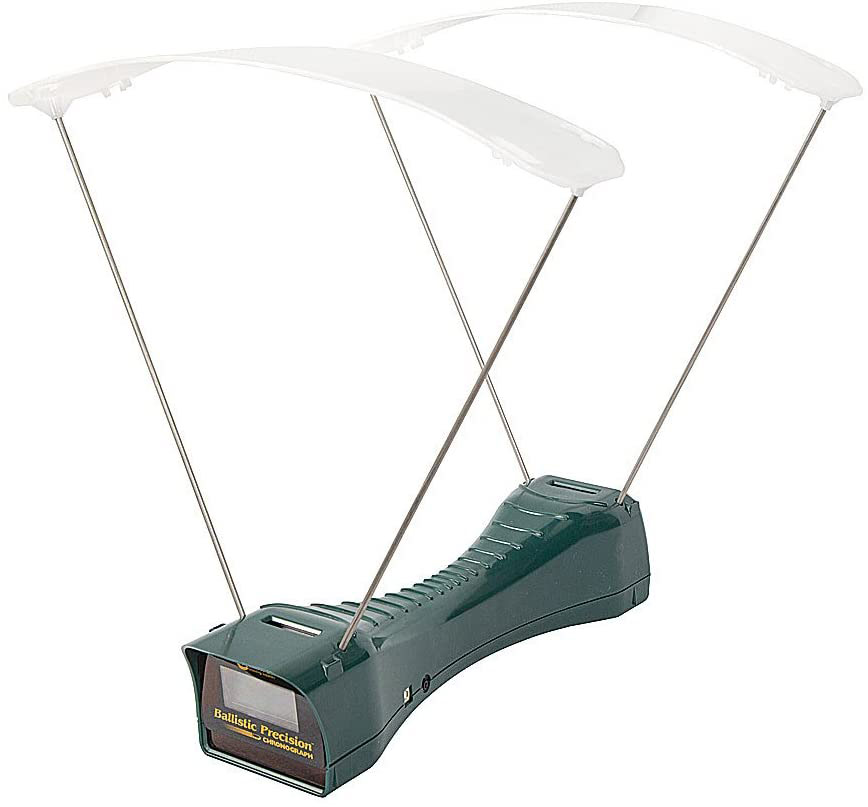 Challenges with these older chronographs are getting them lined up, having enough light, and the possibility of shooting the chronograph as it usually must be positioned 12-15 yards feet in front of the muzzle. Accuracy of measuring is always a question due to the varying quality of chronographs available.

Doppler testing used to be a costly endeavor available only to the major bullet and ammo manufacturers. But now we have an option, thanks to LabRadar.

Lab Radar uses Doppler waves to measure velocity throughout the bullet's flight so you can measure speeds at 100 yards and other distances that you can select instead of only at the muzzle. The Lab Radar is very accurate and sits next to the rifle instead of in front of it. Set up is relatively easy as well. 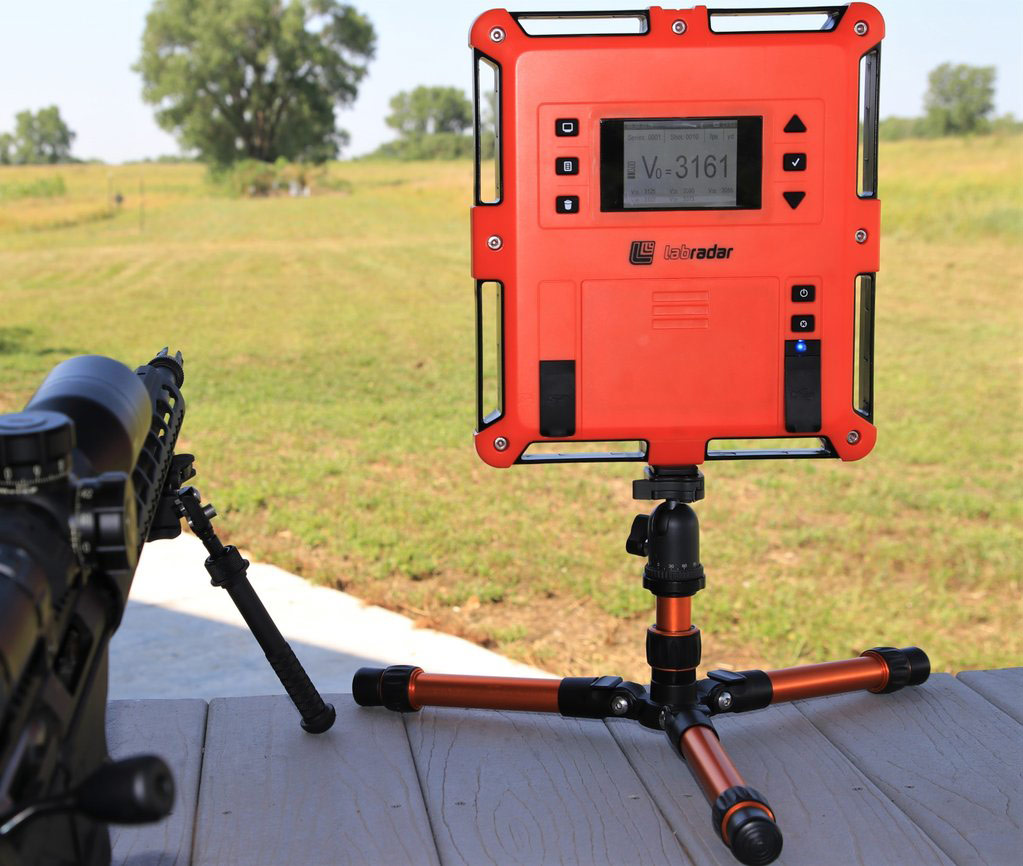 Challenges with the Lab Radar include some difficulty in lining it up with the bullet's flight for measurements. In some situations, you may miss several shots. It's on the pricier end of the chronographs as well. But it is a good investment, especially once you get through the learning curve.

Magnetic chronographs like the MagnetoSpeed use a magnetic bayonet positioned at the end of the barrel to measure velocity.

I love the MagnetoSpeed for its simplicity while using, although setup can be challenging with your first few outings. The MagnetoSpeed bayonet is attached to your barrel via a strap and spacers to help achieve proper bore alignment. Once installation is complete, you can shoot as rapidly as you desire and not miss a measurement. You are also not stuck in a static position while using the Magneto Speed. The data display is simplistic and straightforward as well. 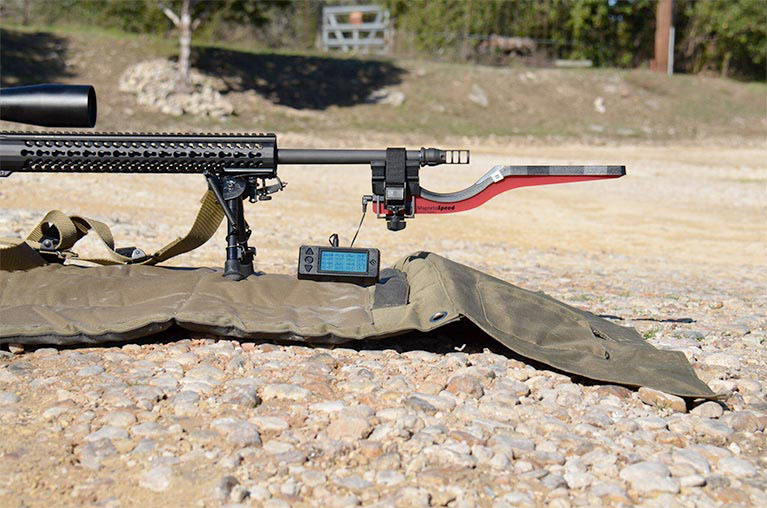 Challenges with the Magnetospeed are point-of-impact changes due to the attachment of the "bayonet" to the barrel, so you can't definitively shoot groups or shoot at distance and expect the same outcome with it removed. That said, there are devices like that offered by Gray Ops Inc. that let you get the bayonet off your barrel while using the MagnetoSpeed.

MEASURING SPEED WITHOUT A CHRONOGRAPH

No chronograph? No worries. You can measure velocity using a ballistic app by using its truing/velocity calibration function. Plug all your vital data into the app once you have a perfect 100-yard zero and zero your turrets. You could even use the velocity on the ammo box for a starting point.

It would be best if you shot at a known distance, preferably as far away as possible. For a 6.5 Creedmoor, 800 to 1,000 yards is good. Let's use 800 yards. Note what your app says is the appropriate dialed elevation to 800 yards. Dial-up, then shoot, doing your best to execute the fundamentals of marksmanship to make sure your shots are accurate. It's also good to have someone spot for you.

Your goal should be to make center impacts, preferably 3-5 in a row. If you miss low or high, change your elevation turret until you get center hits. The goal is to have minimal vertical spread. Do not make any changes to your windage knobs. Once you accomplish this, check your actual vertical come-ups on your optic against what the ballistic solver says it should be.

In the truing/velocity correction function, type in what your actual vertical come up was at that distance, and the app will calculate the velocity based on that data. Truing should be done whether or not you have a chronograph for the most accurate ballistic data.

Velocity is your friend in precision shooting; the value of that velocity will change with your shooting application. Whether you need higher or lower is subjective, but consistency in velocity is the key. 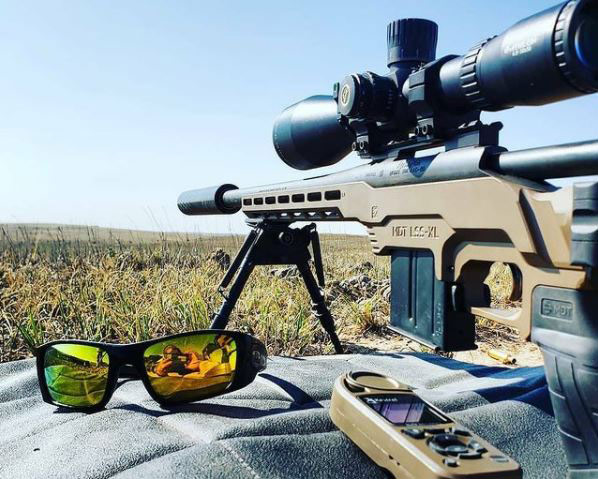