Load development for a new cartridge can often be analogous to a science project and usually requires a lot of experimentation before an optimal formula is found. The 6mm GT is a fairly new cartridge without much load data in the major loading manuals; however, the cartridge designers, George Gardner of GA Precision and Tom Jacobs of Vapor Trail Bullets, have published a loading formula, which is a great place to start.

Before we get into load development, let's take a look at the components I used.

Powder choice was easy, kind of. Since I could not find Varget, I used Vihtavuori N140, and Shooter's World Precision, since these were similar to Varget. Various forums and load developers stated that StaBall 6.5 and H4350 also work great in a 6mm GT.

Bullet choice was pretty easy as well. I already had a case of 105 grain Lapua Scenar-L and a couple of cases of 108 grain Berger BT Target in the reloading room, so we went with those. The ultimate goal was to use 109 gr Berger Long-Range Hybrid Target. Still, we could not source this bullet at the beginning of load development, though we recently got some and worked up a load with it. (More on this later)

For brass cases, there are 2 ½ options: you have the budget option from Hornady ($0.75/piece) and the premium option ($1.25/pc), Alpha Brass. As a bonus option, Alpha made the "GAY TIGER" stamped brass exclusively sold through GAPrecision.net, so naturally, that's the option I chose. 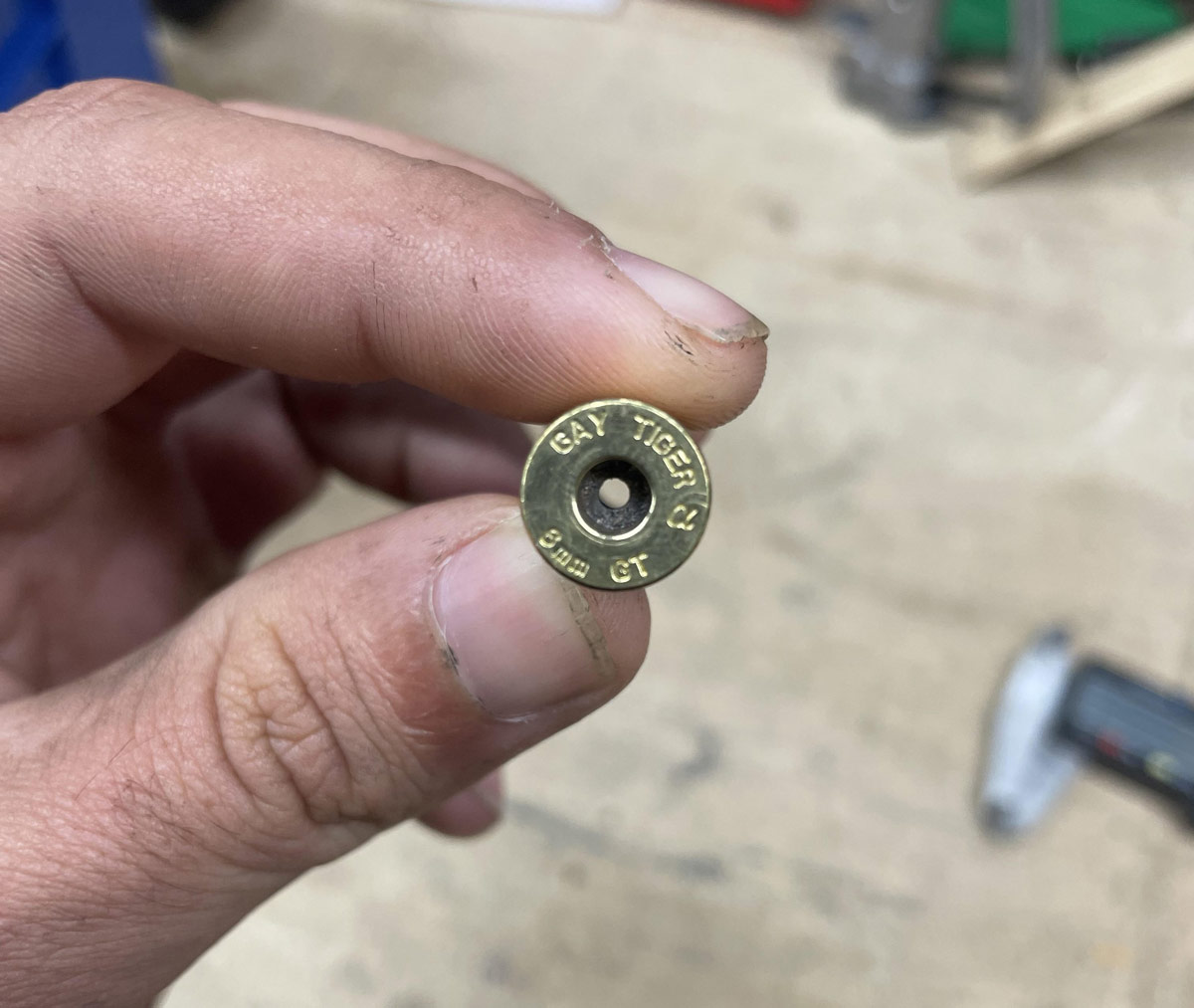 Primers were an easy decision for me as well. I just went with what I had a plethora of on hand, CCI 450 Small Rifle Magnum. Other good options would be Federal GM205M, CCI #41, and CCI BR4. We are aware of the status of primer inventory at the time of writing (SEPT' 21) so use whatever Small RIFLE primers you can get your hands on.

Before we get to the development process, let's knock a couple of things out first: 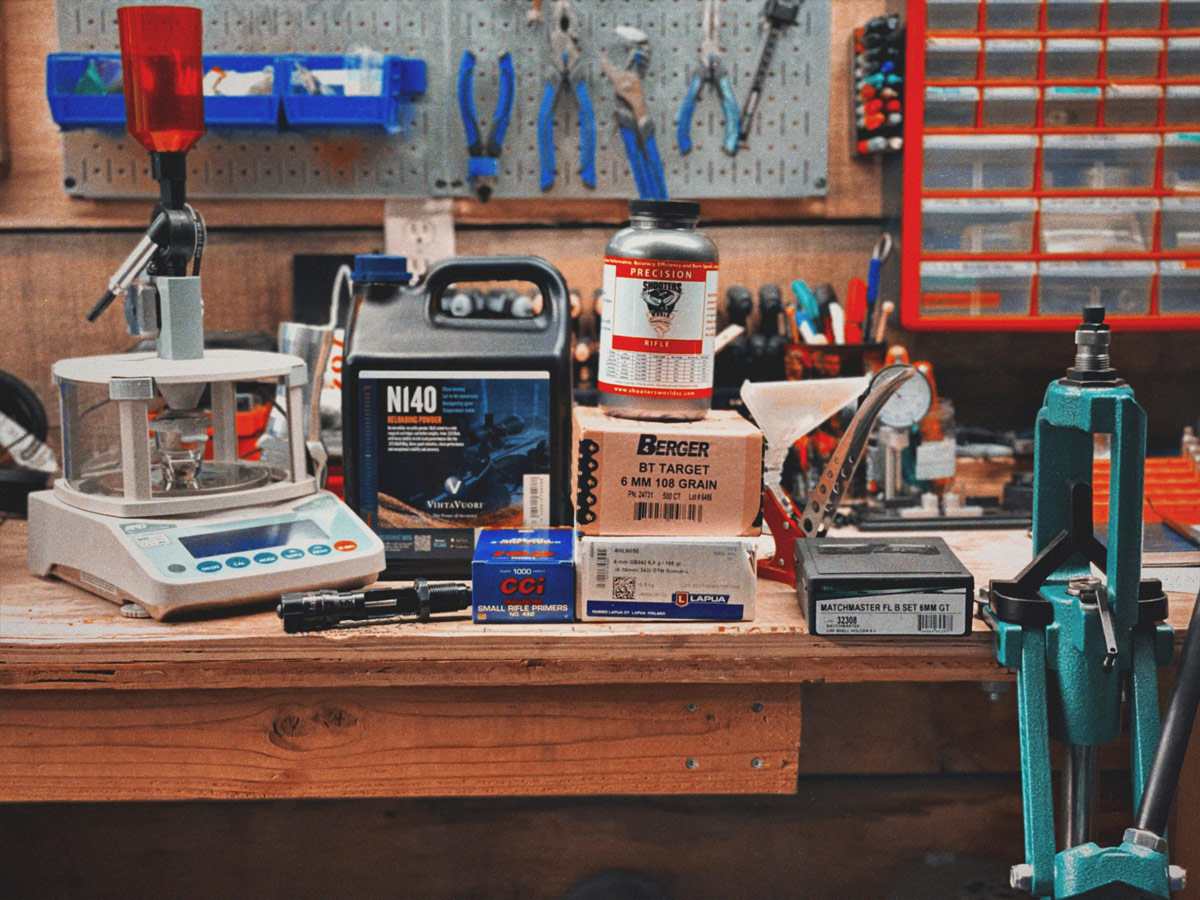 Before testing my loads, I did a barrel break-in/fire-forming. I loaded 50 rounds with a safe load of 38.0 grains of StaBall 6.5 behind 105-grain scenar-L while running cleaning patches every couple of rounds.

Sidenote about barrel break-in: everyone's opinion on barrel break-in is different; if you don't have your ritual, consult your barrel/rifle manufacturer for their suggested break-in method.

After breaking the barrel in, I ran a couple of 10 round velocity ladders with the Berger 108 grain BT Target, what some refer to as the Satterlee Method.

For this, you take your max charge for the selected powder; in this case, it was 34.6 grains of N140 and Shooters World Precision (to be written as 'SWP") and backed off 2 grains. You then load up ten rounds in 0.2-grain increments back up to the max charge and shoot them over a chronograph to identify stable velocities over multiple charges, otherwise known as flat spots or the mythical velocity node. Here's what I found:

So what do we do with these numbers? In theory, loading up rounds in these nodes should produce tight standard deviations (SD) and small extreme spreads (ES) of velocities, leading to small groups. However, this is a tiny sample size.

Looking at these numbers, I realized pretty early on that the Shooters World Precision would not reach the velocities I was looking for (2975-3000 fps) with the 108-grain bullet with a safe powder charge. I stopped load development with this powder and chose to use N140 until I could get my hands on Varget and 109 grain Bergers.

In this case, I'm lucky. There's a node at the max charge that is right around the target velocity. I chose to go with the middle of that node and load up with 34.5 grains of powder.

From there, a seating depth has to be established. There are a few ways to do this; the easiest would be using the Hornady OAL gauge with a modified case. Unfortunately, I do not have one, so I have to do it the good old "guess and check" way.

This could be almost a whole article in itself, but the quick and dirty of it is as follows:

Take a prepped case and a fresh bullet with some case lube on the ogive, put it in the chamber, and close the bolt. Open the bolt and hope the case comes out with the bullet in it. Measure the bullet from the cartridge base to ogive. Subtract 0.020" from that measurement, and that's your starting seating depth. Of course, you should repeat that process 3-5 times and take an average. Still, I planned on shooting several different seating depths to find the right one for my chamber, so I started with a CBTO, or cartridge base to ogive, of 2.010."

Something to note, different bullet shapes like to be jumped from or jammed into the barrel's lands at different distances. Also, factory barrels typically have a longer throat so getting anywhere near the lands is impossible if you're feeding from a magazine. 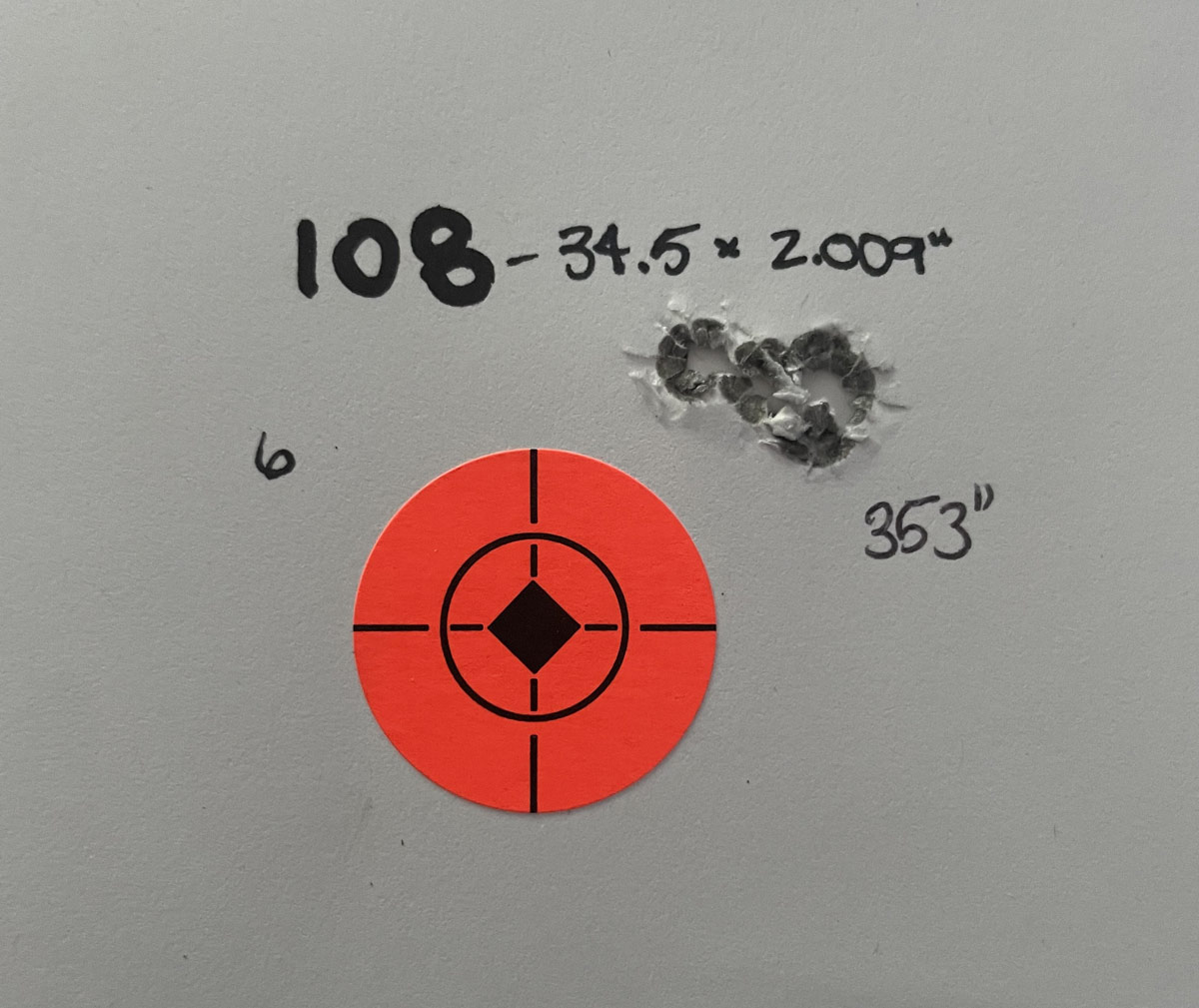 So those WERE my 2 loads: 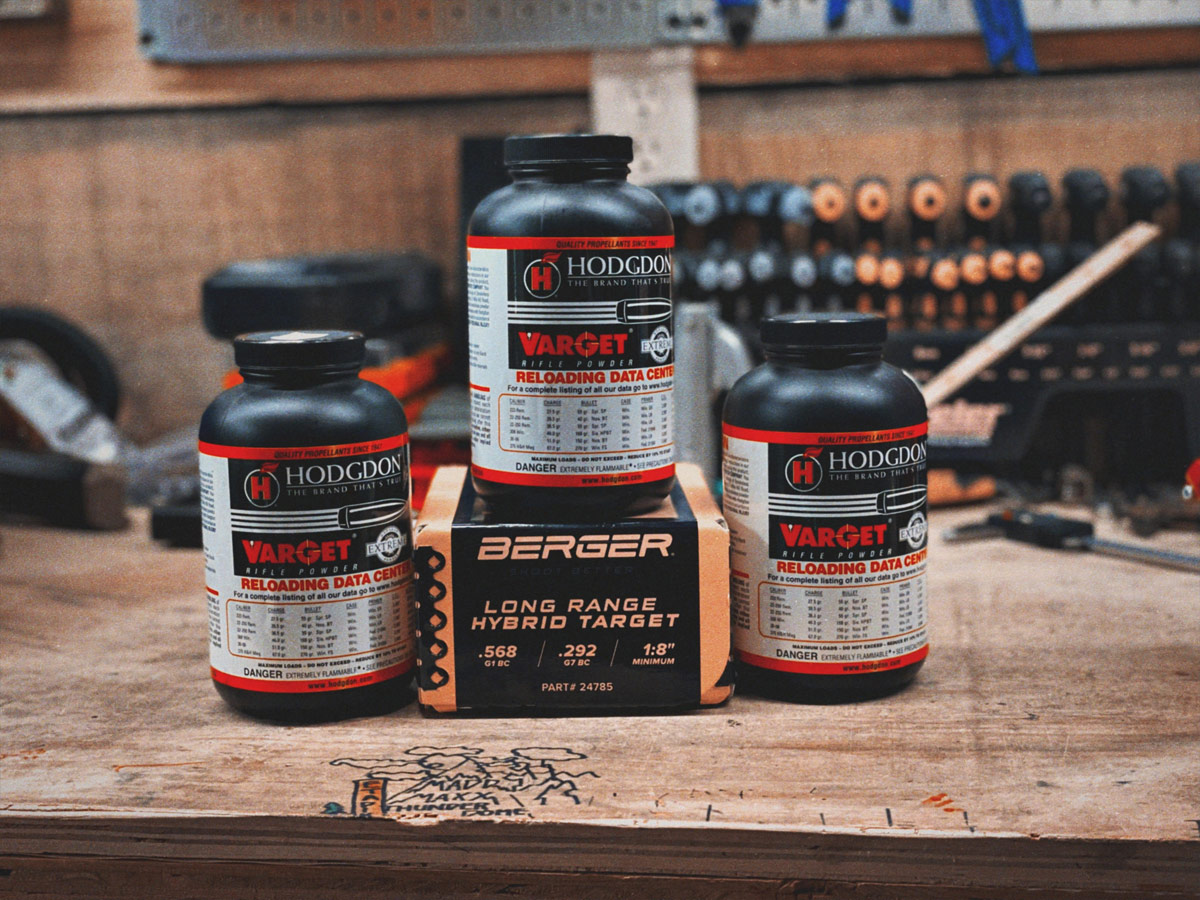 Fortunately for me, I stumbled upon a 500-count box of 109 grain Berger LRHT and a couple of pounds of Varget. After going through the load development process, I settled 34.6 grains of Varget behind the jump tolerant 109s loaded at a cartridge overall length (COAL) of 2.600". They're flying at 2990 fps with an SD of 3.

And the groups? They are fine. 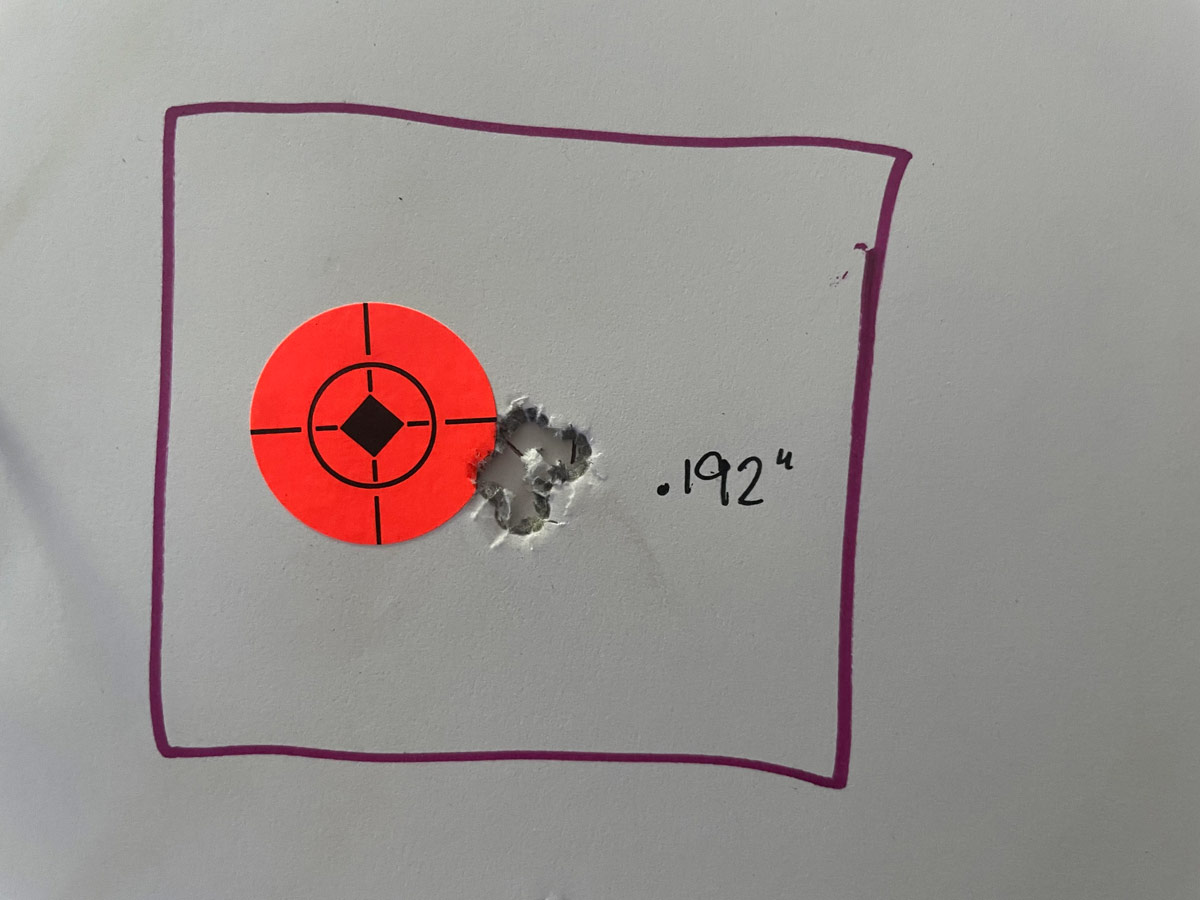 This is not the end all be all process for load development, but it works for me. There are plenty of other options, including the popular Optimal Charge Weight (OCW). My suggestion is to find what works for you and go with it, but don't expect it to go easy every time, and don't be afraid to experiment. I will be experimenting with new powders and bullets as I find them in the off-season, so keep your eyes open.