It was 3:30 in the morning, and I thought for the hundredth time, "I can't believe we paid good money to be out here doing this again." Ashley, my wife and partner, and I were charging up a mountain in waist-high scrub oak looking for a snow pole with a pin punch attached. Now bear in mind beating through this type of brush is a nuisance on flat ground with no pack at sea level, but it becomes downright arduous on 80% slopes carrying the equivalent of a large bag of dog food (40 lbs) at nearly a mile high elevation.

Not only had we paid money to be here. We had dedicated a fair portion of our free time in the year leading up to this, practicing shooting and navigational skills. Date night consisted of putting some leftovers in a Tupperware, leaving the kids with a babysitter, and going out to find practice land nav points in the dark. Not exactly a candle-lit dinner, but the year prior (2021), we had finished 10th, our worst finish so far, leaving a sour taste in our mouths. Especially since we had made some egregious navigational errors that had cost us time and effort. We hoped to redeem ourselves.

Back at the SAC, it was our anniversary; yes, the SAC has fallen exactly on our anniversary for the past 2 years. Another interesting point is the inaugural event was held the same year Ashley and I got married, so this was the 11th SAC and our 11th anniversary, and there we were, again for the 4th time together. It was dark. We were physically and mentally tired, and the brush was literally ripping holes in our clothes, but we knew if we persisted, we would find our next checkpoint.

"How far have we walked on this bearing?" I asked, hoping my fatigue didn't come through in the question. "Almost 800 meters," Ashley responded with confidence and determination. "Good. The point should be about 50 meters out at a bearing of 265 degrees." I plugged the heading into my compass and shined my flashlight into the void just west of us. Sure enough, a glint in the darkness. The reflective tape on the top of the snow stake shined in the light for my flashlight. "Nailed it!". "Quick, punch it, and let's get out of here."

For the uninitiated, the SAC is known as the Sniper Adventure Challenge. It started as a 24-hour event and has grown to 48 hours. It involves land navigation (map and compass only, no GPS), shooting scoped rifles and pistols, and various mental and physical challenges, like a dummy carry or cipher encoding/decoding. It usually starts with some sort of "separator" challenge, like digging a hole and carrying a 100 lb bag filled with dirt a couple of miles. This spreads the teams out a bit, so they are not just following each other to the checkpoints. From then on, it is sort of a "choose your own adventure." Teams can prioritize the challenges or the land navigation, getting checkpoints and bonus checkpoints, or a mix of the two. This year the match was held just outside of Douglas, Wyoming. The terrain was steep, and the venue was expansive. The match started at 1800 on Thursday and concluded 48 hours later at 1800 on Saturday. No one would complete the entire course.

Ashley and I decided to front-load the checkpoints, getting as many of the bonuses as we could early on, and then attempt the challenges when we needed a break from hiking. Because of this choice, we did not get to do any shooting until the final day. This lack of shooting is a significant point of frustration for many competitors. Still, as a hunter, I am used to "taking my rifle for a walk." The SAC requires teammates to carry both a carbine and a long-range rifle. I was the carbine shooter this year, so I chose to run the "Only Shooters S.A.C special" AR-15 chambered in 6.5 Grendel. It is built on one of the old GWACS arms complete polymer lowers and uses an Odin works barrel. To provide stability up front while keeping things light, I added an MDT GRND-POD. This lightweight, affordable option offers all the features I need in a bipod. 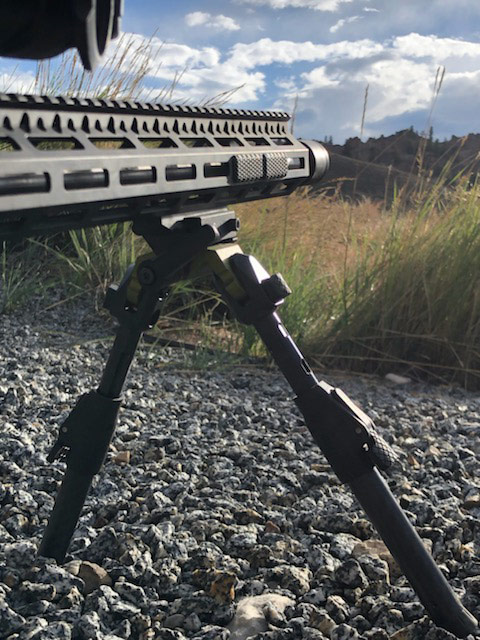 For the Competition I ran a lightweight MDT GRND-POD bipod.

Ashley ran a Howa Mini also chambered in 6.5 Grendel. We settled on the Grendel a few years back because it gave us good external ballistics and the ability to have ammunition commonality, which ultimately means carrying less weight. In our current market, the 6mm ARC would probably be a superior option for shooting this type of match. Given how much wind we had to contend with, however, I may opt for bringing a "real" rifle in future years, maybe something chambered in 6.5 PRC. If this is the case, it will be a Bat Machine bumblebee action in an MDT HNT26 Chassis System with a carbon fiber barrel. Using those components, I could keep my weight within 1lb of my current setup while shooting a far superior cartridge.

Thinking about building a rifle with the MDT HNT26 Chassis System for both competition and hunting.

FINAL DAY OF THE COMPETITION

It was the afternoon of the final day, and Ashley and I found ourselves heavy on checkpoints and lacking in the challenge point department (a healthy mix of both is required to place well.) Fortunately for us, we knew how to remedy that problem, but like many things in the SAC, knowing what to do is the easy part; making yourself do it is where the challenge lies.

Our first order of business was to complete the water challenges we had written off the day before as "sucker stages" (the type of stage that is more trouble than it is worth, like the 100-yard partner summersault). The water challenges were a stream crossing while carrying a dummy and a deep water ford while carrying all of your equipment. The previous day we decided to pass on these as we calculated it would take too long to strip down and bundle our clothes and gear to keep them dry. Wet feet are a prescription for blisters when you still have 30 miles to ruck. Fortunately, at this point in the race, we only planned to cover another 2 miles. "To heck with soggy feet and wet clothes; we needed points!" 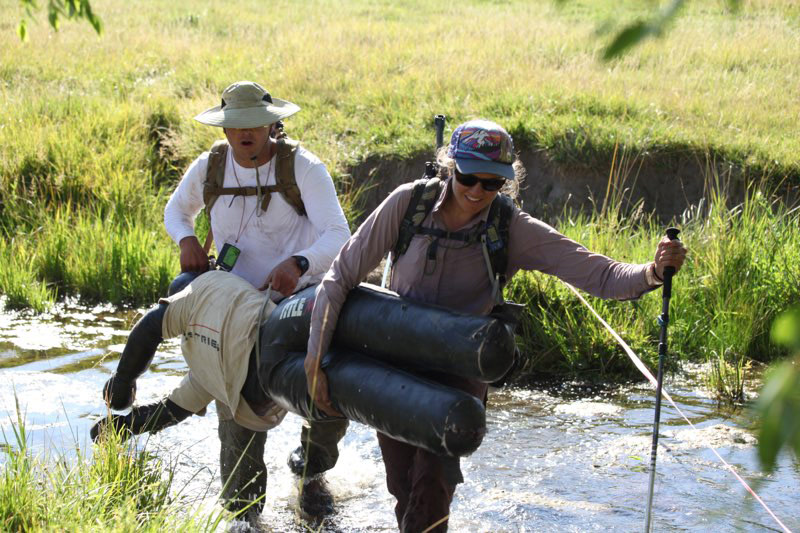 Ashley and I scooped up the dummy and waded across the stream, fully dressed. With that challenge complete, a minute later, we were neck deep in the same irrigation ditch carrying our backpacks on our heads through a large culvert. Emerging soaked from the other side of the ditch, we threw our packs on our backs and jogged off for the final cluster of shooting challenges.

We usually try to hike about 3 miles per hour, which is a brisk walking pace. Unfortunately, this was not an option for us at this point in the race. The shooting stations were about 1.5 miles away, and we only had 20 minutes to get there before they closed down. So, with squishy shoes, we jogged down the dirt 2-track ranch road, nervously checking our watches and hoping we would make it in time. It was a nerve-racking mile and a half, but both of us did take the time to notice how refreshed we felt coming out of that cold water. That physical rejuvenation combined with a heap of mental fortitude sprinkled with little grit was enough to get us there with 3 minutes to spare. We shot our stage and collected a few more points.

The next day at the award ceremony, we waited nervously, hoping our efforts from the day before would be enough to earn us a spot on the podium. "And in 5th place team 10 Hom and Hom". A guttural "Yeeessss" erupted from Ashley's mouth, combined with a double fist pump. We had done it. We made the podium. We had redeemed ourselves! While 5th place wasn't our highest finish, we had finished 4th in a previous year, this was by far our best performance and most miles covered. It was a true testament to the hours of training we had committed. With the sour taste of our 10th-place performance replaced by the sweetness of redemption, Ashley looked over and said, "Good, now we don't ever have to do this again" "Right," I told her with a sly smile. "Never again…..until next time."

Marcus Hom is a shooter through and through. Born to a pistol-packing mama, he has spent his entire life around firearms. Marcus spent much of his adulthood guiding hunts in Alaska, teaching CCW and precision rifle courses, competing in national-level matches, conducting research and development, and gunsmithing. Marcus is a former Federal Law Enforcement Officer.